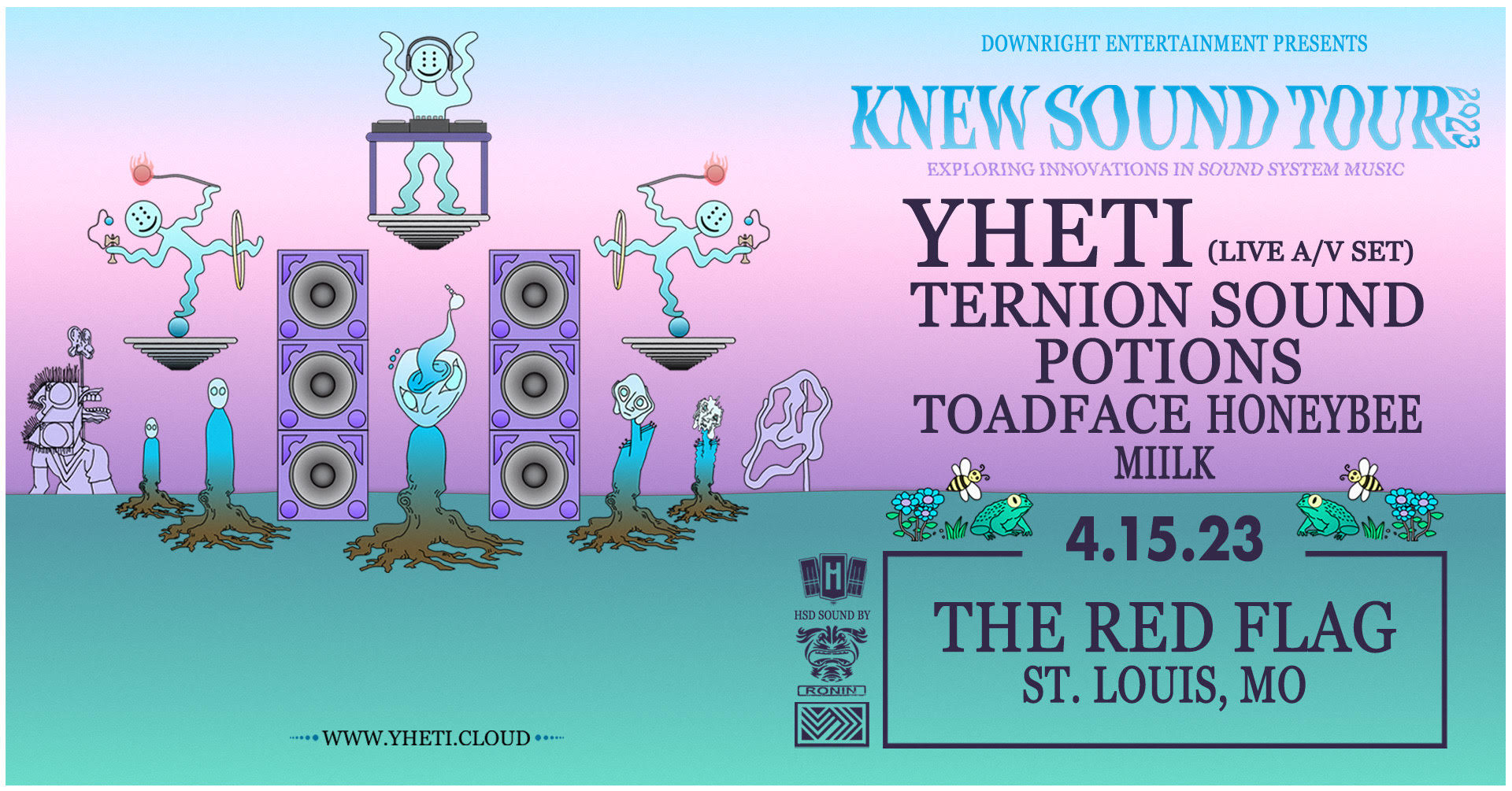 THIS IS AN 18+ EVENT ONLY. Doors 6PM.
Yheti – Yheti has written and released over 150 tracks across the internet datasphere. A fusion of a thousand inspirations Yheti’s live performances are self described as… “an ever morphing detailed sound sculpture that plays with the ears of those open to the more experimental, surreal, low end heavy side of electronic music. With the intention of creating a champion dance environment through innovative bass lines, interesting rhythms, and soul driven melodies.”  Over the past 10yrs Yheti has performed at many major festivals, headlined many venues across North America, toured with many champions of sound and gained the support of a few low-key famous people. 2030 will be a huge year for Yheti, so look far into the future or very deep into the present, put your ear close up to reality, and you may hear the faint rumble of subwoofers in the distance. This is an exploration of sound, technology, psychology and how it all interacts with the complex human condition we all experience. Rooted in love for art and moving forward with gusto.

Ternion Sound – The trio known as Ternion Sound was born out of the Infrasound Music Festival in 2016 when producers Andrew, Aric, and Jack joined forces for an impromptu set on the Beach Stage. Their chemistry was infectious, and immediately obvious. When the three reconvened at a shared studio in Minneapolis, MN it was clear their bond was meant for more than just one festival set. The trio began producing together with the goal of respecting the UK sound, while simultaneously implementing their own production styles.

potions – is an electronic music producer / musician based out of Northern California. Blending a variety of tempos and styles, his music walks the line between experimental psychedelia and a dance-able, narrative experience. The forthcoming album, New Earth Formula (out July 2022), is an alluring and melodic journey through the mind of the multi-instrumental producer. Emphasizing unique rhythmic and melodic cadence with an exploration of distortion and atonality, potions seeks to provide a full spectrum audio experience derived from a broad range of influences.

Toadface – Championing his signature swampy sound since 2015, amphibious producer Toadface has made quite the splash in the dance music realm. The brainchild of Ohio native Todd Holler, the project quickly attracted the ears of listeners as a result of Holler’s unique approach to production – one that effortlessly fuses elements of trap and dubstep together to create a sound that was unheard of to fans of bass music at the time. A lifelong gamer, Holler drew inspiration from the imaginative landscapes of the virtual worlds he so often immersed himself in and harnessed those ideas in his creative output. Aside from gaming, Holler cites his older brother and fellow producer Yheti as his biggest inspiration and directly points to their tight knit relationship as a big reason his career has scaled to the point it’s reached today.

Honeybee – Exploring and articulating the realms of audio and visual expression together, HoneyBee works with various musical genres while she creates surreal imagery to accompany her audio works and performances. After releasing her first official single, “Identity Glitch” in 2019 and her debut EP ‘homegirl’ in 2021, she followed up with the third installment of her Hi-Sucrose mixtape series in March of 2022. Currently wrapping up her next release, she plans to present her second EP in 2023. Building her portfolio with each release, she continues to establish herself as a versatile artist amongst the underground.